Papi went for his 3rd visit at Woof Gang Grooming, so far we are really happy with the groomer Stacey, she did a good job. 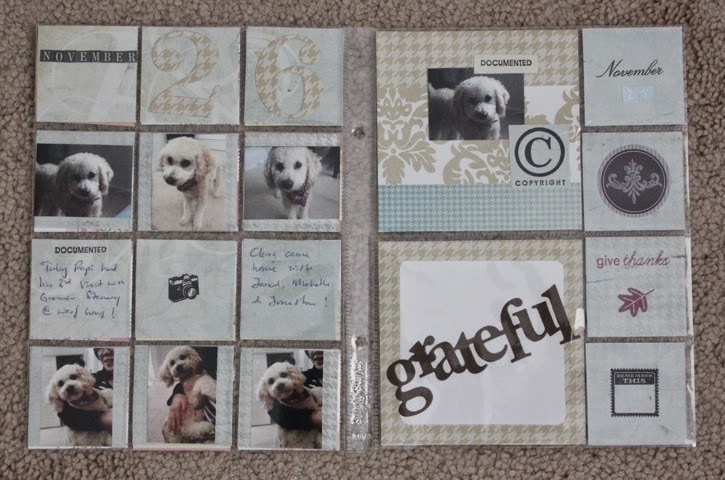 Clare, her boyfriend Jared came home around 1.30 AM with two of their friends, Michelle and Jonathan, we are happy that the kids are here to spent Thanksgiving with us.
Here's the photo we took when the kids just stepped into the house, guess who Clare hugs first? 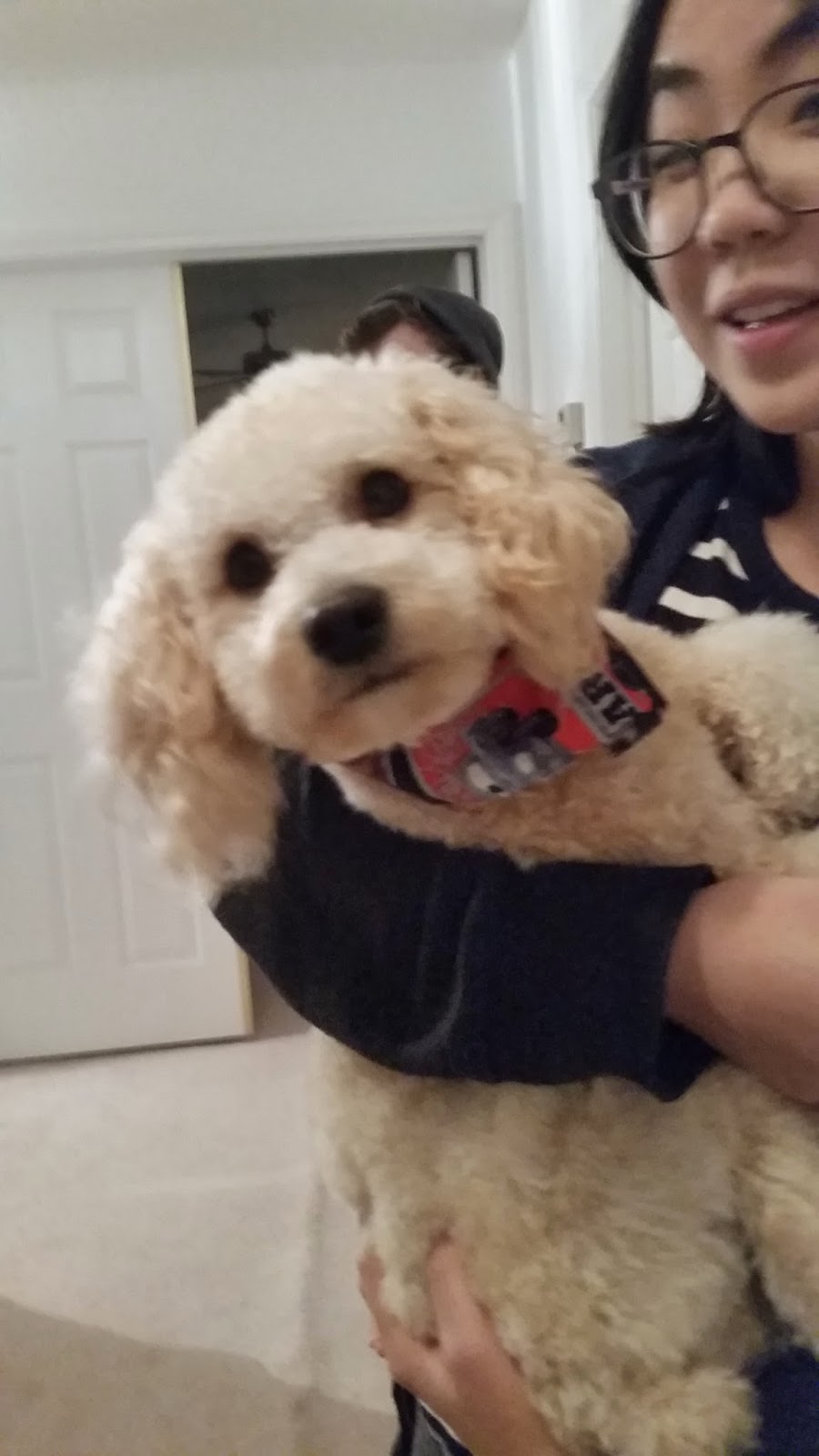 For Thanksgiving dinner, we baked two chickens instead of turkey, lots of potato and peppers, we have steamed corn and edamame for sides, and my homemade croissants too. 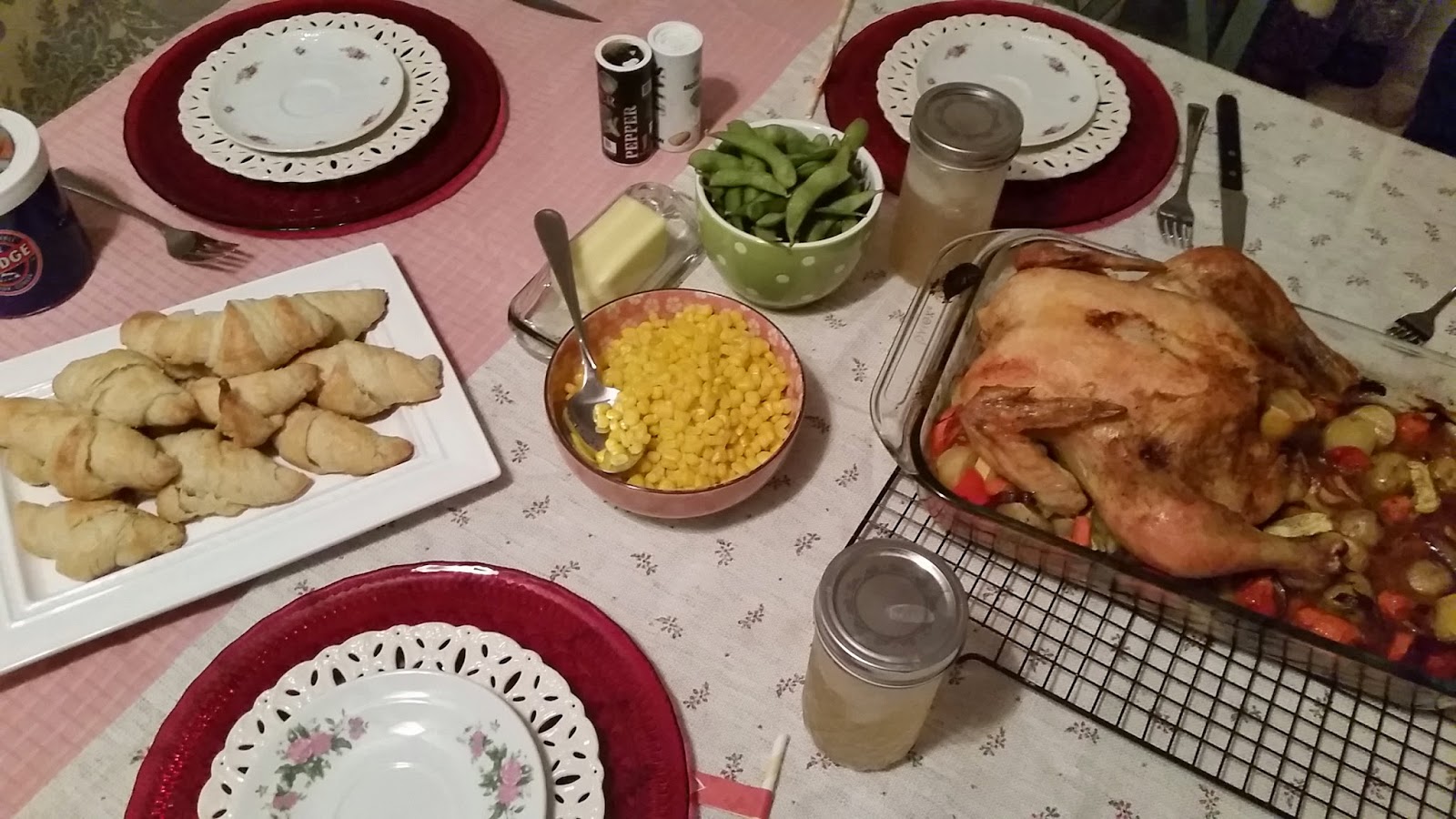 Jonathan is the cameraman, so we don't have him in this picture 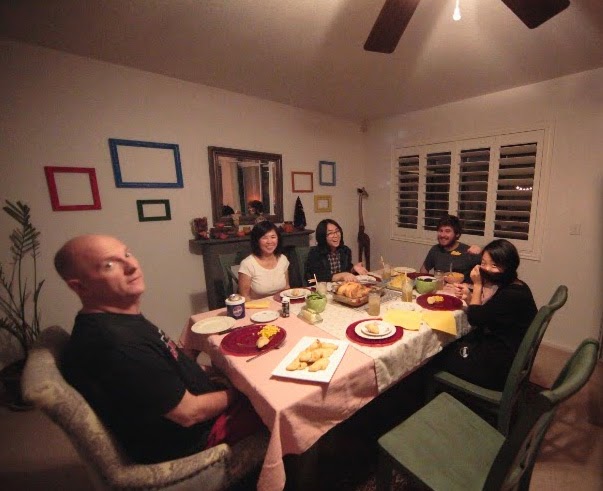 We have been letting Papi run outside whenever he sees birds taking bird bath at our water fountain in the backyard, we would open the glass door, and he will only run outside when we give him the "OK", and in 2 seconds, he is up on the top of the fountain, of course by the time he is out, the birds all flew away, so he was like looking right, look left, trying to see where the birds gone too, it was so funny, we called him Lion King. 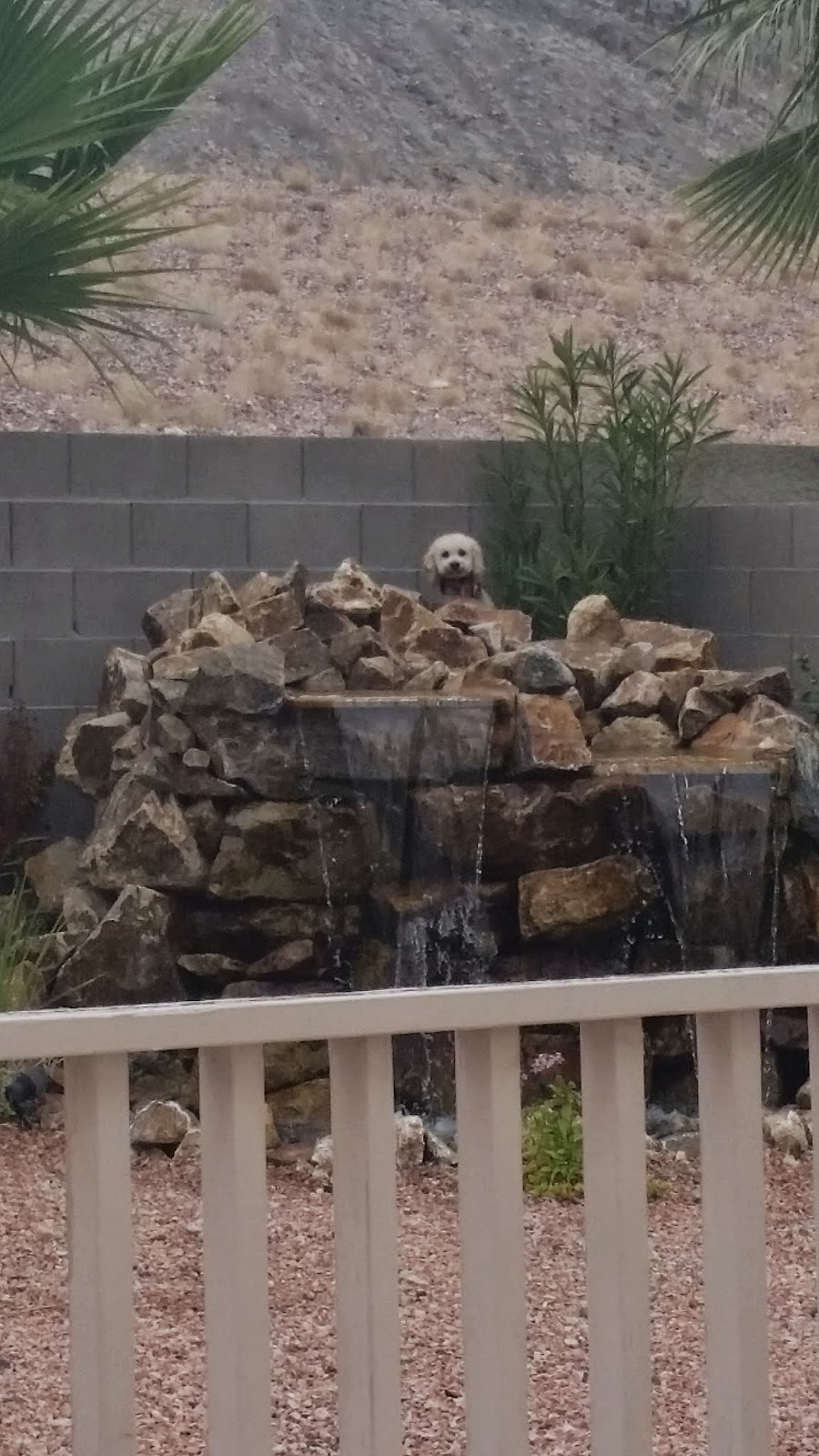 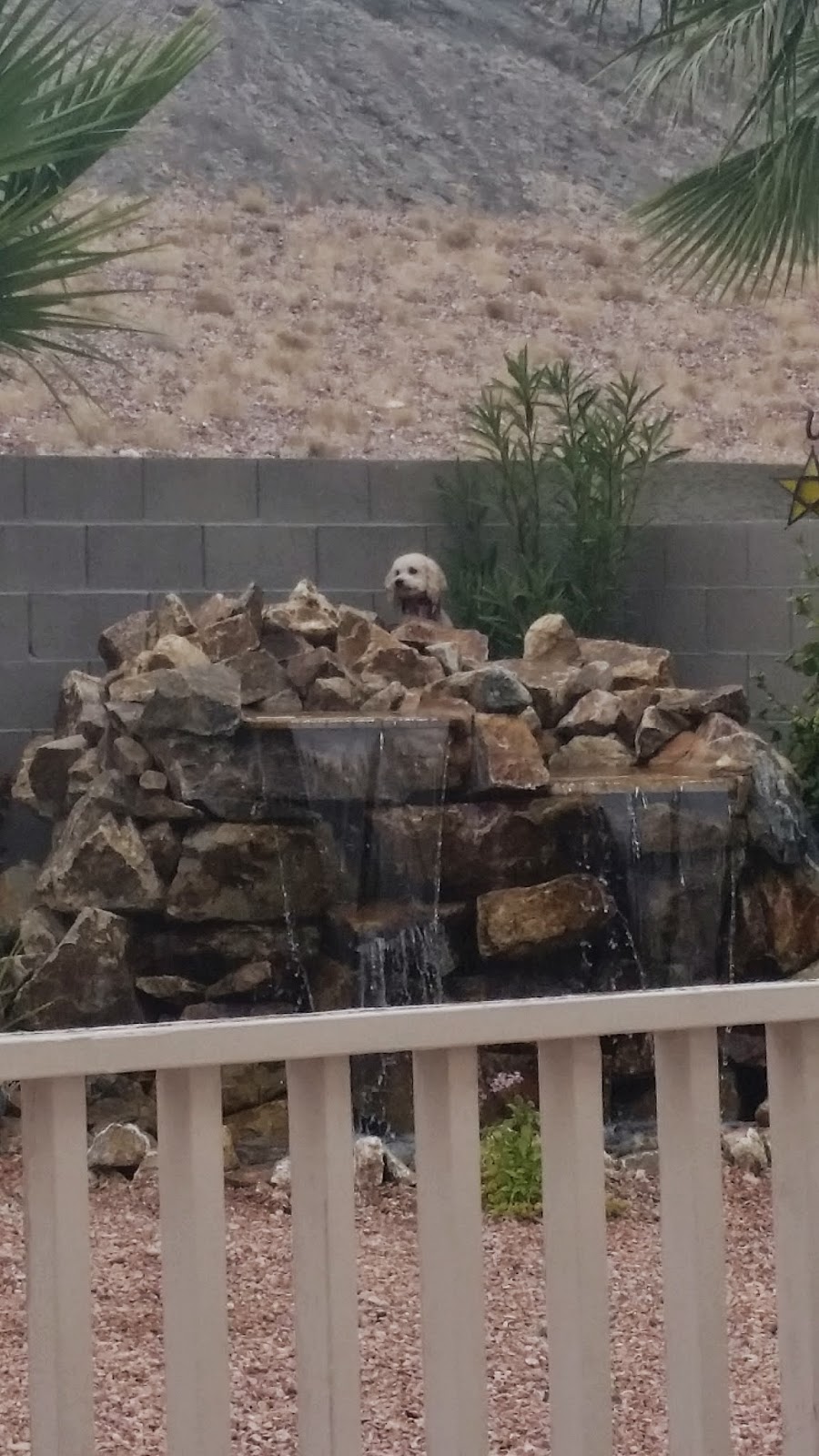 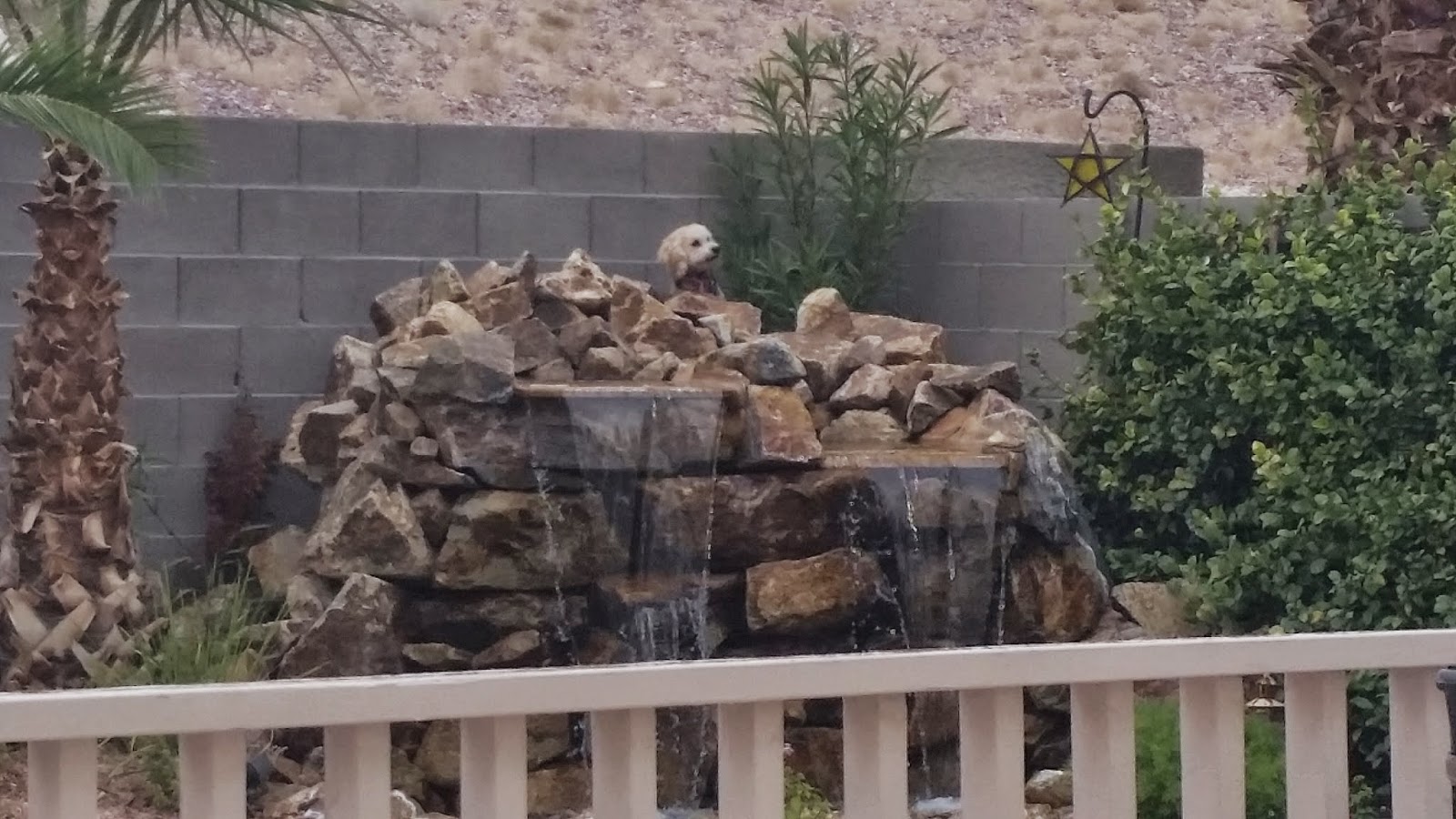 
Papi's favorite is to stand in front of the glass door and waits for the birds, once he sees them, he will be asking us to let him out 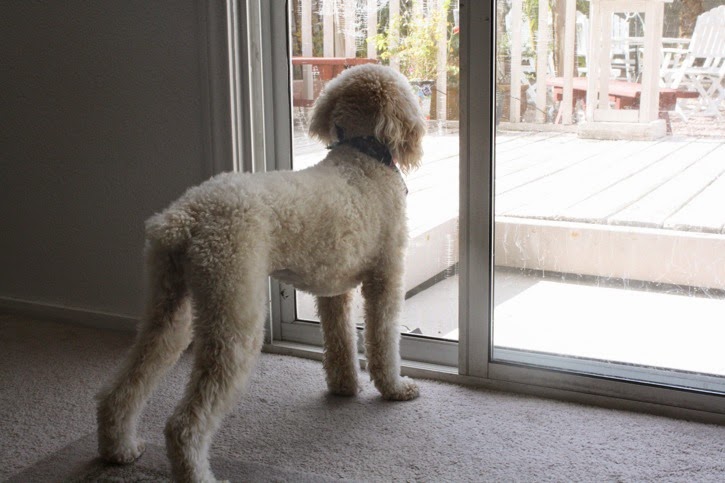 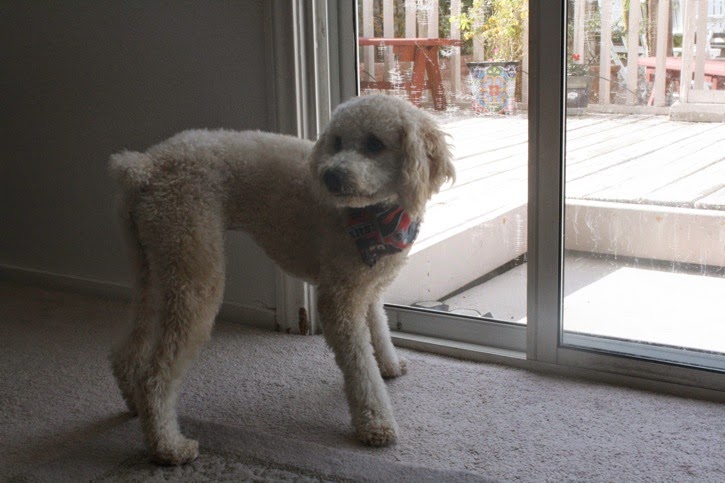 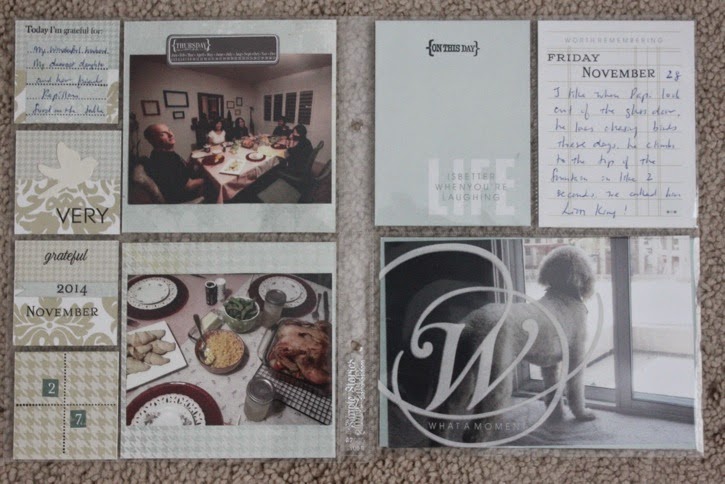 The kids really like the yoghurt I made for them for breakfast, we also took them out for Korean BBQ. 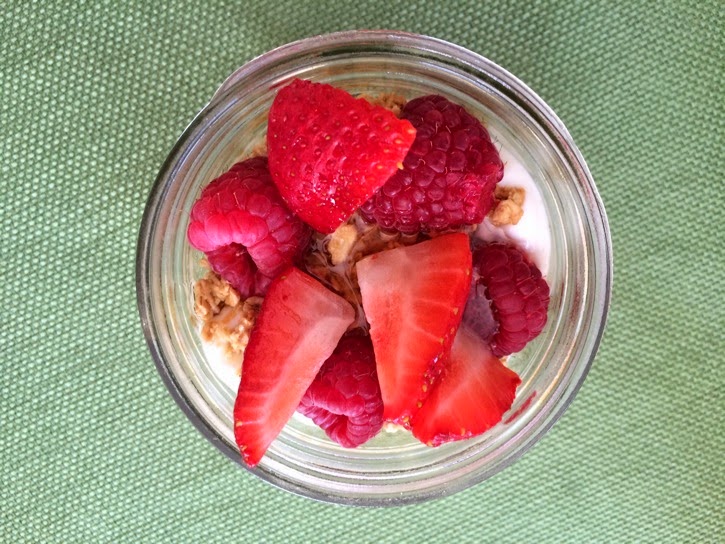 The kids are driving back to CA early this morning, I woke up a bit late and trying to rush out of the house to say goodbye to them, and hurt my fingers in a rush, half of my nails nearly fell off, it hurts so bad. 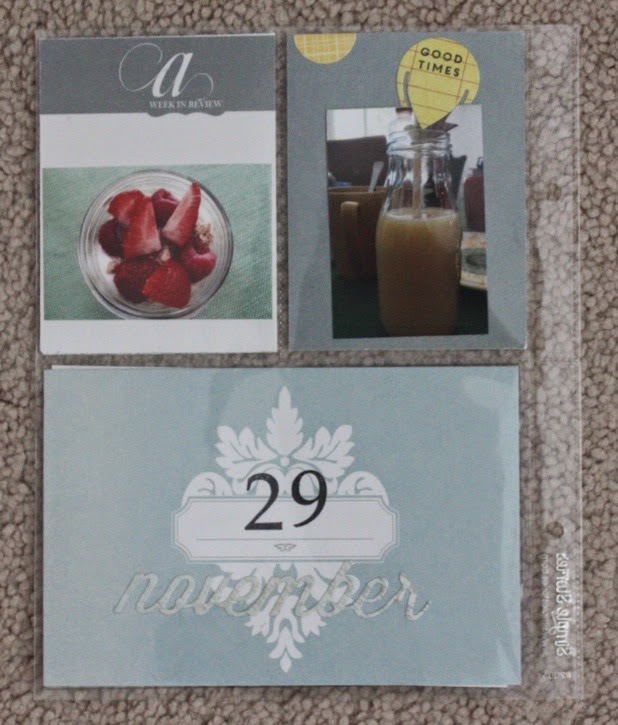 Posted by Kirsty Vittetoe at 4:07 AM

I love those pictures and layouts... especially those with Papi :o)
Gabi

Hello Kirsty,
YAY for more PL pages, they are so good. Love seeing Papi in them, he is so big. How funny that he chases the birds.

Lovely seeing the family for Thanksgiving dinner. I know you must love that. The food looked YUMMY!

I'm sorry about your finger, I did that last year and it does hurt. Takes a long time to heal too.

Hope you had a Merry Christmas. Can't believe this is the last week of 2014. What a great year it's been, full of many blessings.
I have my new PL set up and ready, YAY! Finishing up this year's and my DD is almost done too.
Thanks for a wonderful year of your gorgeous crafts and family and YOU!
hugs,
dawn

Soooooo cute he wants to chase the birds ... Dandy does that too! LOL!! I loveeeee the photos!! And I hope your nail is better now!!!!!!!

Love all the pages you have done, Kirsty! Your beautiful photo's of your family make it such a nice keepsake. I am behind in commenting, but am still enjoying family here! Have a happy Monday!

Beautiful! SO fun to see you rocking the Ruby RockIt goodies in your PL pages! Looks amazing!

Adorable photos of Papi again! I especially like the "Lion King" ones.

Sorry to hear that you hurt your hand. I hope that it's feeling better by now.

Have a Happy New Year, Kirsty!!!

Beautiful layouts! And, love the family photos! Papi is just way too CUTE! Love the fountain pics with him as "king"...hehehe...so precious!:-)

Great post and all your lovely created pages, so cute photos with Papi on the fountain!

My husband and I both had a good laugh at Papi and his fierce protection of your home. We love that you call him Lion King!

Looks like a lovely Thanksgiving with the kids. Always so fun to see Papi!